What Happens When A Dog Comes Face To Face With A Kangaroo?

No harm unfolded to either animal as the two just swam side by side.
COMMENTS 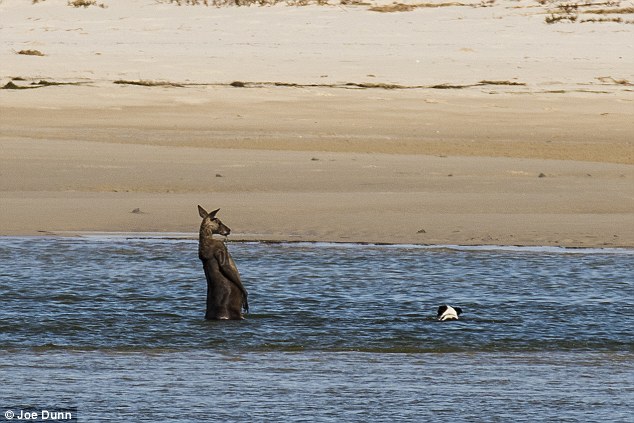 What happens when a dog and a kangaroo come face to face for the first time? Apparently they go for a swim together.

Local photographer, Joe Dunn, from Maleny Queensland captured the whole moment when the black and white dog started barking frantically at an “object” in the water. At first Joe wasn’t sure what the bouncing object was but a closer look led him to discovering that it was an Eastern Grey kangaroo.

Surprised by the sight in front of him, Joe continued to look on when he saw the dog suddenly running into the water to swim alongside the kangaroo. Based on the dog’s initial reaction, Joe suspects that the kangaroo either lured the dog into the water or the dog was chasing him so he hopped in there to escape.

Fortunately, no harm unfolded to either animal as the two just swam by each others side before a dingy boat scooped the dog up. According to the Australian Mammal Society, Kangaroos are known to be good swimmers and they have a tendency to go into the water when they’re trying to escape a threat.

After being scooped up from the water the playful pooch ran off down the beach to cause trouble elsewhere- Dunn says the dog’s owner was nowhere to be seen.

The two animals cooled before anything else could happen

Both Kangaroo and dog are safe

Dog Takes Recovering Into Her Own Hands, Heals From Puppy Mill Abuse