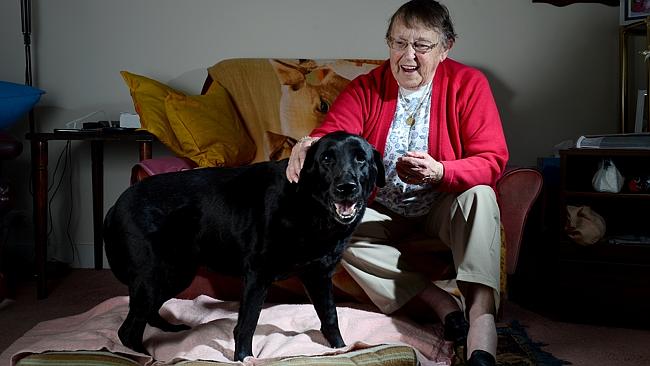 SYDNEY, AUSTRALIA – Claire Donovan was in for a real surprise when a reunion she thought would never happen came to fruition.  Thirteen Years ago, Donovan fell in love with guide dog puppy Panda when she came to her house at a mere 12-weeks old. Donovan was instructed to train the pup to prepare her for service and then hand her back to the organization at two-years-old.

Donovan grew so close to the dog that upon giving her back, she asked the organization to let them know when Panda was retiring.  Given the length of time that passed, she never thought she would actually get the call but 11 years later the phone rang. Panda was retiring and Donovan was welcome to adopt her.

Although Donovan had trained 68 pups over the course of the 13 years, Panda was the very first one and held a special place in her heart. When Mrs Donovan, 82, finally reunited with Panda she broke down in tears as she watched Panda go to the water bowl, which had stayed in the same place since Panda first lived there.

Donovan says that Panda has settled right into her old home and sleeps in a bed right beside her own. Panda will live out the rest of her days being showered with love and care as Mrs. Donovan’s number one.

Mrs. Donovan and Panda have an unbreakable bond

Mrs. Donovan and Panda have an unbreakable bond

Claire Donovan with Panda when she was training her

Puppy Pile Up: Prepare For Cuteness

Fetch, You Say? This Dog Can Catch!
COMMENTS 0