It was a race against time as the tar began to harden around the puppies bodies but the family succeeded in saving them.
COMMENTS 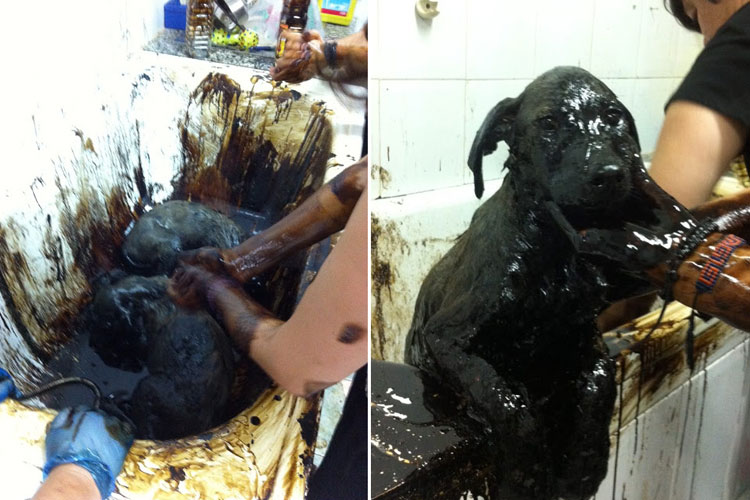 A cruel act of abandonment has turned into a miracle as two puppies are saved from a pit of tar. In Cartagena, Spain, a family discovered three puppies drowning inside the pit when they sprung to action to save them. One man reached towards the pups, while the other held onto his waist so that he wouldn’t fall in while attempting the rescue.

It was a race against time as the tar began to harden around the puppies bodies but the family succeeded in getting them to the veterinary clinic. Once in professional care, what followed was a long night of trying to clean the puppies with a mixture of vegetable oil and detergent. Unfortunately one of the puppies didn’t survive the whole ordeal, while the other two were finally washed clean.

Although the Greyhound-mix puppies now look clean, they are still facing two more weeks of being washed down twice-daily, as tar is incredibly difficult to remove. In the meantime, authorities are seeking out any information that they can get about the culprit of this cruel act. According to the police it is common for Greyhound dogs to be abandoned as they are primarily used as hunting dogs in Spain.

The puppies have been named Chape and Pote and they are currently recovering at the El Portico dog rescue centre in Cartagena.

The puppies are relaxing and recovering

The puppies are doing better every day

The puppies cries led the rescue family to them

How To Handle A Dog With Thunderstorm Phobia