Blind Dog Explores The World Around Him With His Nose

Are dogs smart as two-year old humans?
View All...
Tips

Man Creates Super Vest For Dogs After His Dog Was Killed By A Coyote
13 Ways a Dogs Love for You is Unconditional (#4 Will Get You Grabbing the Tissues)
View All...
Rescue

7 Famous Dogs In History You Probably Never Heard Of

These seven dogs stand out in history as dogs who went far and beyond your average canine companionship.
COMMENTS

These seven dogs stand out in history as dogs who went far and beyond your average canine companionship.

Stubby is the only dog in history to receive the rank of Sergeant for combat duty. Stubby was an American stray dog found by a soldier that brought him over to the trenches with him in Europe. Stubby warned of countless gas attacks and incoming artillery he located an dressed wounded solvers and even single-handedly captured a German spy.

Barry rescued at least 40 people in his life time. Living in the Alps, this St. Bernard would frequently rescue people from treacherous and icy situations. He once carried a lost boy on his back through a snowstorm saving the boys life.

Chips was the most decorated dog from World War II. He received the Silver Star and Purple Heart for his work during the war. Chips dragged a phone cable across a battlefield so his platoon could call for help. He dove into enemy lines and took down and single handedly took down a group of gunman attacking his platoon.

When a small American town faced a diphtheria epidemic they relied on Balto to charge through a snowstorm to get them the serum. The storm was so bad that the sled drivers couldn’t see through the storm but Balto were able to find the town on their own and prevent the small town from this epidemic.

This black lab saved over 27 people from drowning. No one believed the first person who was pulled from the water until the dog repeatedly rescued people one by one throughout his lifetime. 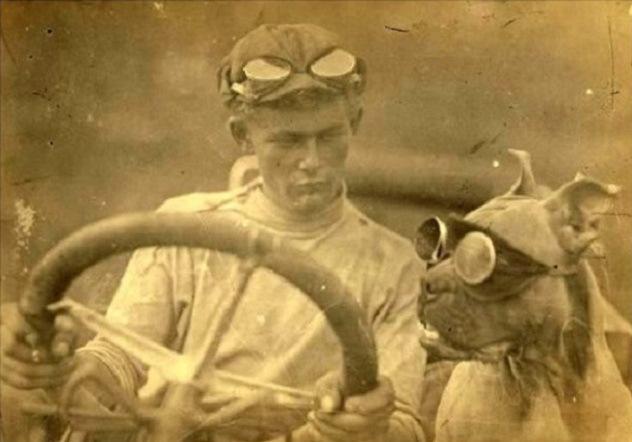 Bud Nelson was the first dog to cross the U.S. in a car. It might not seem like a big accomplishment but cars back then weren’t made to cross the country. His owner, Horatio Nelson Jackson who was also the first person to cross the country in a car had Bud as his companion the whole trip, travelling every bumpy road together. Bud was known for his fearlessness and his awesome canine driving goggles.

Congress Votes To Reunited Military Dogs With Their Handlers