Lelly's new role as a canine ambassador for Animals Asia, will see her featured in anti-animal cruelty posters and TV campaigns across Asia.
COMMENTS 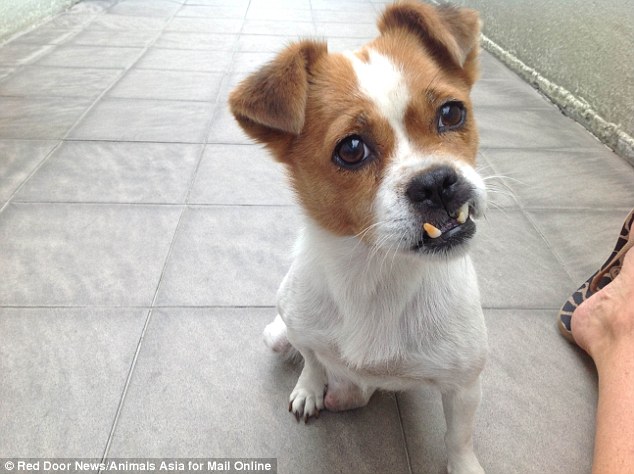 A two-legged stray dog has just given birth to puppies and is now set to become an animal ambassador by a British-run charity. Nine-year old Lelly lost her two back legs in a train accident, when she was scavenging for food in a remote city in Northern China. Despite her accident though, the resilience of the dog paid off and she was flown to Hong Kong by the charity who wanted to give her a second chance at life.

Post-accident Lelly also incredibly gave birth to puppies but unfortunately, three out of four of the pups died from Distemper before they could be rescued. However, the surviving pup has already made the move with Lelly to Hong Kong.

Lelly’s new role as a canine ambassador for Animals Asia, will see her featured in anti-animal cruelty posters and TV campaigns across Asia. The tough as nails doggy is already winning hearts, with the charity’s biggest celebrity supporter, Downtown Abbey actress Lesley Nicol seen cuddling Lelly on a visit to China.

Lelly’s new life is coming with a lot of well deserved perks, including a pair of wheels to replace her missing back legs. The wheels are being designed for her by a specialist from Hong Kong.

When Animal Asia’s British founder Jill Robinson first read about Lelly’s incredible survival story in the Daily Mail, she was really inspired to get involved in the dogs life. Thanks to the wonderful people at the Animals Asia organization, Lelly’s life has finally taken a turn for the better.

Lelly is in high spirits despite her accident

Lelly with the team from Animals Asia

Lelly and her puppies

Unfortunately only one puppy survived

Lelly is getting wheels for her back legs, especially designed for her

Lelly is one of the most resilient little dogs