We count down the Top 10 Most Popular Internet Cats From YouTube's First 10 years, From Maru to Simon's Cat to Grumpy Cat.
COMMENTS

YouTube and cats – two things entwined and interwoven in the fabric of the internet for all of time. You almost cannot have one without the other, for what are funny cats without YouTube videos of them, and what is YouTube without cat videos? NOTHING. Many a famous internet cat owes its popularity and fortune to the ubiquitous video sharing service, and I’m sure to a certain extent the opposite is true. This year YouTube is celebrating its 10th anniversary, and in honor of that The Guardian asked the Youtube Trends team what the top 10 most popular cats of their first decade were. They crunched the numbers, factoring in channel subscribers, video views and the “discussion and creativity” they inspired amongst the denizens of the interwebs. And despite in-store book signings, a massive amount of merchandise, book, movie (etc, etc) the top spot goes not to Grumpy Cat, but to my own personal favorite:

Ahhh Maru. The amazing Japanese Scottish-fold with just under 500,000 subscribers, who has been going strong for the past 6 years. The video above is the first (and still my favorite) video I ever saw of him. This cat MUST ENTER EVERY BOX, no matter how small, how flat, how giant, he will jump, slide and mash his chubby little body inside of them, so help him god. If his whole body won’t fit then he will happily jam just his head inside of it and walk around proudly. But then he wants it off…but once he gets it off he just wants to put his head back into it. IDK, man, cats. Maru was once even presented with an IMPENETRABLE BOX. A box no other cat would dare to attempt. But did it stop him? NO, he just took it apart and then got inside. Maru never says die.

Grumpy Cat comes in at #2, not necessarily because she is less popular than Maru, but because she isn’t primarily famous for/because of her YouTube videos. No, little Tarder Sauce (that’s her real name) got famous for her Grumpy Cat Meme, which began as a couple of photos uploaded by owner Tabatha Bundsen’s brother to the /r/pics subreddit[1] September 23rd, 2012: 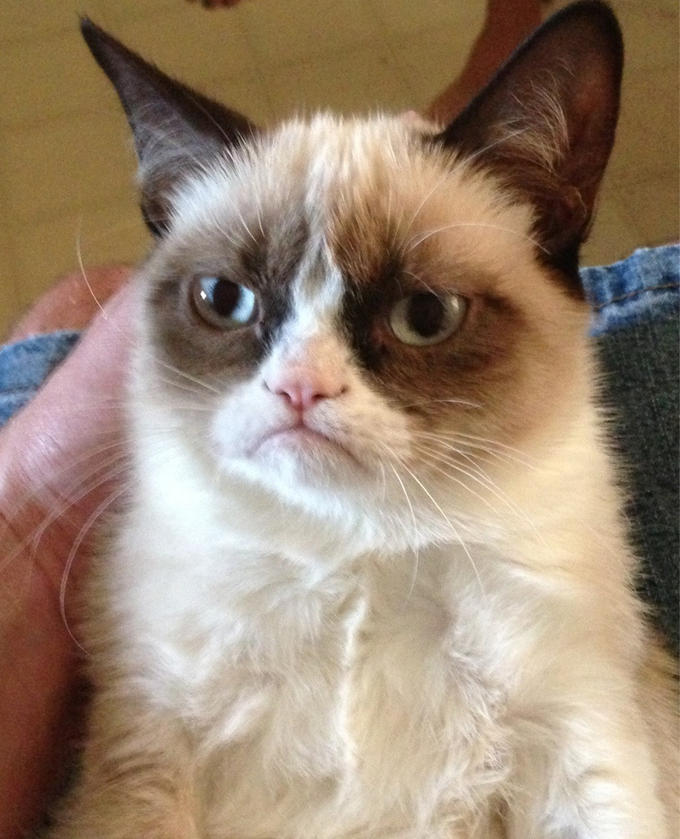 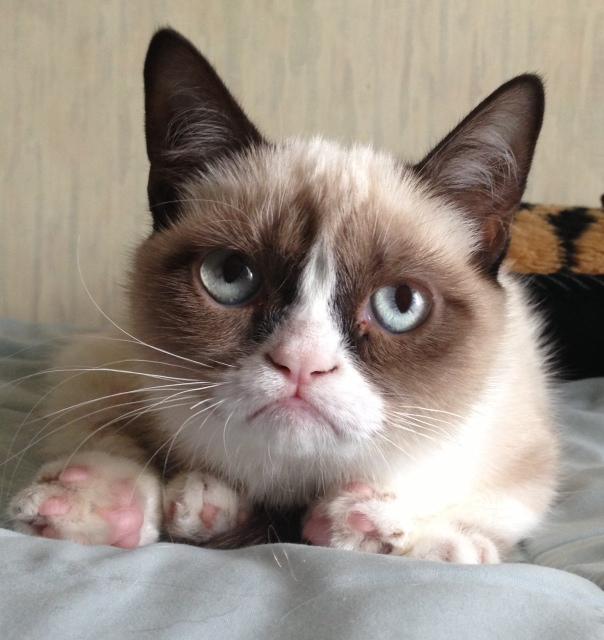 The Reddit post was immediately memed, and reached the front page of Reddit with more than 25,300 up votes in the first 24 hours. Meanwhile, the Imgur page gained nearly 1,030,000 views in the first 48 hours. Later that same day three video clips of Tarder Sauce were uploaded to YouTube by Bundsen, but none were ever as popular as her image macros.

Though she is more well known for her meme than her YouTube, Grumpy Cat’s reign is supreme. She is no longer merely an internet celebrity, but has made it into the lexicon of pop culture. She now has a countless number of products with her face on them (45668 of them on Amazon alone), an art project, a movie, a line of coffee drinks called Grumppuccinos, a book which she does book signing tours for,  she was the official “spokescat” for Friskies, and was even in a McDonald’s commercial (she’s 0.49 seconds in).


This video is the first Simon’s Cat cartoon ever to hit YouTube. The channel now has almost 3.5 million subscribers, 45 videos and the animator, Simon Tofield, recently raised £310k on crowdfunding website Indiegogo to fund a longer 11 minute short.  The beauty of Simon’s Cat cartoons are how they hilariously and accurately depict the insane behaviour every cat owner knows, loves, hates, and finds endlessly funny. From the ever-so-slightly exaggerated way they wake us up (very glad I don’t have a baseball bat laying about the house) in the morning to feed them, to how they chase birds and squirrels (love those two), to seasonal ones like how they always manage to somehow ruin the Christmas Tree, to how they react to catnip, seeing themselves in the mirror for the first time, how they always try to get into your suitcase, and how sometimes they just go crazy-go-nuts-insane for absolutely no reason.

In 2009, YouTube user rozzzafly uploaded a single, perfect, glistening jewel of a YouTube cat video. Clocking in at only 0.16 seconds, and now at over 5.5 million views, it’s easy to see why everyone loves this charming, adorable kitten.

In case you are not a fan of Batman and have never seen 2012’s The Dark Night Rises, Bane is once of the villains in the Batman series of comics and movies. If you are not familiar with Bane, please watch this video to increase the hilarity of the BaneCat one ten-fold. Bane usually terrorizes Batman, and in the BaneCat series BaneCat appropriately terrorizes her owner (in their behind the scenes video it is revealed that BaneCat is actually female but don’t tell the angry-internet-dudes who are upset about their favorite childhood movies being re-made starring women).

For those who prefer their cats moody, thoughtful with a philosophical bent, your best bet for famous internet cats is Henri, The Existential Cat. Filmed in black and white and filled with ennui, this depressed cat is sure to lift your spirits.

Colonel Meow, may he rest in peace, may no longer be with us, but he will rule the collective country of our hearts forever. Colonel Meow was a male Himalayan–Persian, who holds the 2014 Guinness world record for the longest fur on a cat. He got famous after his owners posted photos of him looking forever-pissed and planning to overtake the world, and his antics live on on his YouTube channel. He was even once the CEO of Buzzfeed!

The original Nyan Cat video has over 120 million plays, and for good reason! It’s cute, fun, and annoyingly catchy (it is now stuck in your head for minimum 3 days. Sorry, not sorry). It’s a pop-tart-cat with a rainbow coming out of its butt, what’s not to love? Nyan cat has an official website, a slew of video games, a ton of covers in different genres (that last one is especially fantastic), and best of all, this glorious masterpiece: NyanCat looping for a solid 10 hours (with over 41m plays?!).

Probably the most OG of all cat videos, the original Keyboard Cat was filmed back in 1984 by Charlie Schmidt, on VHS. Schmidt then uploaded it to YouTube in 2007 where it sat largely unnoticed until blogger Brad O’Farrel asked Schmidt’s permission to use his footage, and he made a mashup video of the cat “playing off” the guy who fails to safely take his wheelchair down an escalator in this video. The cat then became the mascot for “fail videos,” playing off anyone who did something badly. This idea came from the trope of “giving someone the hook” for a bad performance, a technique from Vaudeville shows wherein a giant hook comes onstage to pull off a performer who is doing a bad job.  After Brad’s original (which doesn’t seem to be on YouTube anymore) so many people tacked Keyboard Cat onto the end of “fail” videos that now if you search YouTube for “Play him off, keyboard cat” you get 54,200 results.

To be honest, I’m not entirely sure why this was included, as Sparta is not the most famous internet cat. To be fair, the video, which was posted in 2007, now has over 81 million views, but the cat in question did not really go on to reach notoriety.

And that concludes our countdown of 10 Most Famous Internet Cats from YouTube’s First 10 Years. The real question on everybody’s minds is: why didn’t the original list include Lil Bub?!?!?!?! JUST LOOK AT THIS FACE!

This gross oversight is odd, as Lil Bub has over 167k subscribers, millions of views on her YouTube videos, has been famous since 2011, has a book for which she did a book tour, a calendar and stars in a documentary about famous internet cats (yes actually) that won the Tribeca Online Festival Best Feature Film award. Lil Bub sells tons of merchandise and donates much of the profits to animal rescue groups, so go buy a plushie or a mug or a cellphone case. Personally, I think that ‘Lil Bub should be up there around #4, knocking all subsequent cats down a number.

Honorable mention goes to Shiro Neko, the cat who will let you put pretty much anything on its head .

Callianne Bachman is passionate about memes, cats and the internet at large. She has gone as Keyboard Cat, Maru and Grumpy Cat for Halloween, and the photos of her in her Grumpy Cat costume even made it onto the Official Grumpy Cat Website back in 2012, along with the Gumpkin (Grumpy Cat pumpkin) she carved.

Cute Rabbit wants to play, Cat sits on his head