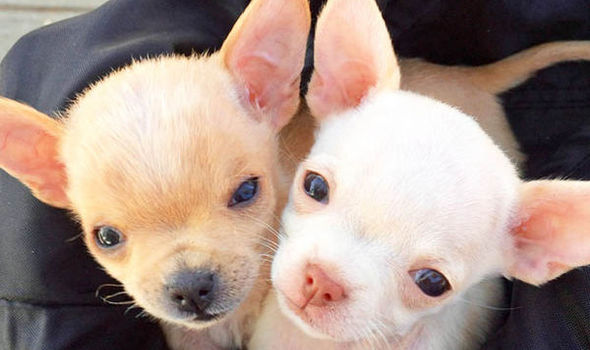 SANTA MONICA, Calif. — After a challenging start to life, adorable Chihuahua pups Pinky and Peanut have come along way since being born by emergency c-section. The two siblings were the only survivors of the litter of four, when their mom developed a bacterial infection of the blood. The Forgotten Dog Foundation, which rescued Pinky and Peanut reveal that the other two pups died in the womb and may have already been dead for up to two days.

The veterinarians treating the dog, say it was due to the neglect of her owner that the dog got blood poisoning, which ultimately led to her death.  Following their birth, Pinky and Peanut were transferred to a foster home, where their foster parents fed them every two hours to keep them alive. Christina and Jason Becker, took great care of the pups to ensure their survival along with their Pit Bull, who became a surrogate mother to the two pups.

The mouse-sized pups were born via c-section.

The mouse-sized pups were born via c-section.

Their foster parents had to feed them every two hours to ensure their survival.

The fosters Pit Bull took on the surrogate mother role.

Despite their trying beginning, Pinky and Peanut have made a full recovery and are now looking for a forever home. The Forgotten Dog Foundation founder, Linzi Glass, says that the pups have been posted online as a package deal, as they rely on each other for survival. If you’re interested in adopting the 12-week-old dogs check out the rescues website here.