Despite the horrid conditions that the pups are kept in, the puppy farm is deemed 'legal.'
COMMENTS 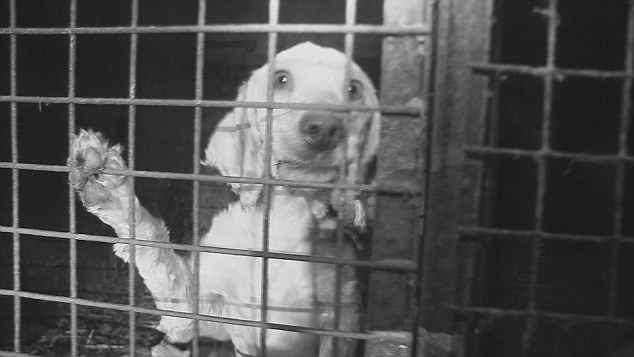 LIVERPOOL, England — A reporter from the BBC show Panorama, has revealed the shocking truth behind a legal puppy farm in Ireland and the prison-like conditions that the dogs live in. On the episode, the reporter meets the puppy farm owner, Eric Hale, who claims that his kennel meets “all the requirements for a breeding establishment.” Yet one look inside, shows that the pups and dogs are crammed into dark, wooden crates that resemble the battery cages that hens are often kept in.

READ MORE: DEMAND FOR DESIGNER DOGS HAS RESULTED IN AN INCREASE OF PUPPY MILLS

In this particular episode, Panorama explores Hale’s Northern Irish farm to uncover just how the largest licensed breeder in the country runs his operation. Hale who owns 120 ‘breeding bitches,’ has a continual flow of puppies being transported from Ireland to England. Not long after the puppies are born, Hale transports them by boat to England, where he then distributes them to various pet stores across the country. With just one of his female dogs being able to generate £25,000 worth of pups in her lifetime, it does not look like Hale plans on slowing down anytime soon.

The pups are kept in conditions similar to those of battery hens.

The pups are kept in conditions similar to those of battery hens.

The Panorama episodes depicts the dogs living in prison-like cages.

The dogs do not even have direct access to natural lighting.

The multi-million pound a year industry shows no signs of slowing down.

Despite the horrid conditions the dogs are kept in, Hale defends his organization by saying that his dogs have plenty of space to sleep, are provided with food and water and well socialized. The images however, beg to differ and after seeing the footage, canine behaviour specialist Dr. John Bradshaw reveals, ‘If they are in there 24/7 then those dogs are seriously deprived. They are basically in jail.’ Watch the footage from the puppy farm in the video below.

This cat spent 13 years at a shelter but thanks to a letter to Santa, he found his forever home!